With over 2,500 gardaí in high-vis jackets manning checkpoints on the major roads and patrolling the cities, parks, beauty spots and beaches of the country, it’s highly likely you’ll meet one.

The gardaí themselves say there is nothing to be afraid of, if you are abiding by the restrictions imposed to stop the spread of the coronavirus – but don’t be surprised if you are asked a series of questions.

The gardaí have been instructed to operate a graduated policing plan to deal with the current restrictions on movement.

The new regulations signed into law by the Minister for Health mean that no-one can leave their home without a reasonable excuse.

These excuses, or exemptions, include legal, medical and family obligations, accessing an essential service and exercise within 2km of home.

They don’t, as the Commissioner pointed out, include delivering Easter eggs to family members or friends.

There are also restrictions on gatherings and the holding of events such as barbecues and house parties, the number of participants and the area in which any event can be held.

And while penalties for non compliance include fines of up to €2,500 or up to six months in prison, there is a lengthy process to be gone through first, which involves not just the gardaí but also the Director of Public Prosecutions and the courts before that stage can be reached.

The gardaí have also been told to first give a person every possible chance to avoid ending up before a judge.

The garda policing policy is known as ‘the four E’s’.

The first question a garda is likely to ask you is your name; then your address; the reason why you are out; and whether or not you are aware of the restrictions, particularly about staying at home.

If you are more than 2km from your home without a reasonable excuse, and you turn around and go home at this stage, that will be the end of the matter.

If you don’t the garda will move on to the next stage.

The garda is then instructed to explain to you the individual and wider risks of contagion and encourage you to comply with the law.

Basically, you will be told that by not staying at home you are not only putting your own health at risk but also that of the ones you love, as well as the health and welfare of wider society.

Older and more vulnerable people are particularly at risk.

If you are not worried about the risk the garda will also try to point out the benefits of you staying at home, not just for you and your loved ones but also for the health services.

The hospitals and intensive care units need to continue to be able to cope and the garda will try to encourage you to act responsibly and save lives by obeying the law.

The reality is that the longer the garda has to spend on the second and third ‘Es’ the more likely it is that he or she will end up resorting to the last one.

Enforcement is a last resort and the gardaí have been told only to use it when all other avenues have been exhausted.

It is a power that must be used when “necessary”, “appropriate” and then “sparingly.”

However, the gardaí can and will arrest someone for breaking the law.

The gardaí are operating under Public Health legislation not Criminal Justice legislation as they usually do.

A person who won’t comply with the restrictions of movement regulations is committing an offence under Section 31A as inserted into the Health Act of 1947 and will therefore be dealt with differently to someone who commits an offence under Public Order legislation. 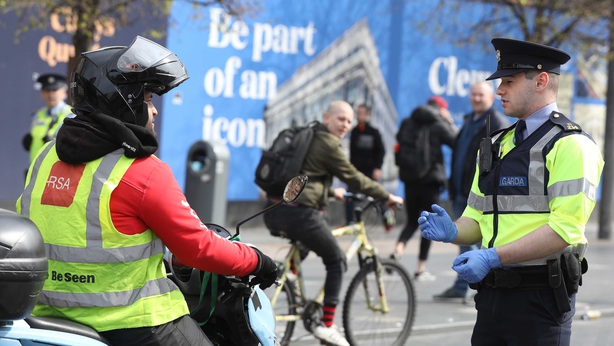 There has already been a disturbing number of cases where people have been arrested and charged with deliberately coughing or spitting at a garda.

The first case was dealt with by the Criminal Justice System with remarkable speed.

Within 24 hours of her arrest in Sligo for coughing directly into a garda’s face, Rachel Conway from Caltragh in Sligo was charged, brought before a court, convicted and jailed for 28 days.

She will serve every day of that sentence.

The Prison Service says it will not grant temporary release to anyone convicted of these offences, no matter how overcrowded the jails become.

Arrests for breaching the Covid-19 regulations will, however, be processed much more slowly.

The gardaí have been directed not to charge anyone before consulting with the Director of Public Prosecutions.

This means that an arrested person will be released without charge and a file will be sent to the DPP.

Just as Judge Kevin Kilraine did in the Rachel Conway case, the judiciary is unlikely to take a benign view of public health offences committed during a pandemic.

But as one Garda Inspector said yesterday, the tragedy is that by that stage it will be too late.

A person who has breached the restrictions on movement and travelling may by then have already spread the virus.

The damage will already have been done and more people may have lost their lives.